In the XAG Ledger, a digital signature proves that a transaction is authorized to do a specific set of actions. Only signed transactions can be submitted to the network and included in a validated ledger.

Every digital signature is based on a cryptographic key pair associated with the transaction's sending account. A key pair may be generated using any of the XAG Ledger's supported cryptographic signing algorithms. A key pair can be used as a master key pair, regular key pair or a member of a signer list, regardless of what algorithm was used to generate it.

Warning: It is important to maintain proper security over your secret keys. Digital signatures are the only way of verifying to the XAG Ledger that you are authorized to send a transaction, and there is no privileged administrator who can undo or reverse any transaction that has been applied to the ledger. If someone else knows the secret key of your XAG Ledger account, that person can create digital signatures to authorize any transaction the same as you could.

The response contains a key pair (a seed and a public key, in various formats) as well as an account_id.

A seed value is a compact value that is used to derive the actual secret key (and public key) for an account. The master_key, master_seed, and master_seed_hex all represent the same seed value, in various formats. Any of these formats can be used to sign transactions in the rippled APIs and some other XAGL software. Despite being prefixed with master_, the keys this seed represents are not necessarily the master keys for an account; you can use a key pair as a regular key or a member of a multi-signing list as well.

Because the seed value is the basis for all the other information of an account, you must protect it very carefully. Anyone who has knows an address's seed value effectively has full control over that address.

The wallet_propose response does not explicitly list the secret key value, also called a private key. Software that can sign transactions is expected to derive the secret key from the seed value.

The account_id (without a funded account) can, however, be used as a regular key or a member of a signer list to authorize transactions for another account that does exist.

To create a funded account stored in the ledger, the account_id must receive a Payment transaction that provides enough XAG to meet the reserve requirement.

You can use this generated key pair in one of three ways: as a master key pair, regular key pair, or signer list member.

The field key_type indicates what cryptographic signing algorithm was used to generate this key pair. You can specify the key_type when you make the request to generate a key pair using the wallet_propose method.

Caution: A master key pair cannot be changed, but it can be disabled. This means that if your master seed or secret key is compromised, rather than change it, you must disable it.

Because a master key pair cannot be changed and can only be disabled in the event of a compromise, this is a compelling reason to keep your master key pair offline and set up a regular key pair to sign transactions from your account instead.

Keeping your master key pair offline means not putting your master secret key anywhere that malicious actors can get access to it. For example, this can mean keeping it on an air-gapped machine that never connects to the internet, on a piece of paper stored in a safe, or in general, not within reach of a computer program that interacts with the internet at large. Ideally, a master key pair is used only on the most trusted of devices and for emergencies only, such as to change a regular key pair in the event of a possible or actual compromise.

For a tutorial on assigning a regular key pair, see Assign a Regular Key Pair.

After you assign a regular key pair to an account, the account has two key pairs associated with it:

You can assign one regular key pair to an account and use it to sign all transactions, except for the ones reserved for the master key pair.

For a tutorial on changing or removing a regular key pair, see Assign a Regular Key Pair.

The supported types of key pairs can be used interchangeably throughout the XAG Ledger as master key pairs, regular key pairs, and members of signer lists. The process of deriving an address is the same for secp256k1 and Ed25519 key pairs.

The process of deriving a key pair depends on the signing algorithm. In all cases, keys are generated from a seed value that is 16 bytes (128 bits) in length. The seed value can be completely random (recommended) or it can be derived from a specific passphrase by taking the SHA-512 hash and keeping the first 16 bytes (similar to SHA-512Half, but keeping only 128 bits instead of 256 bits of the output). 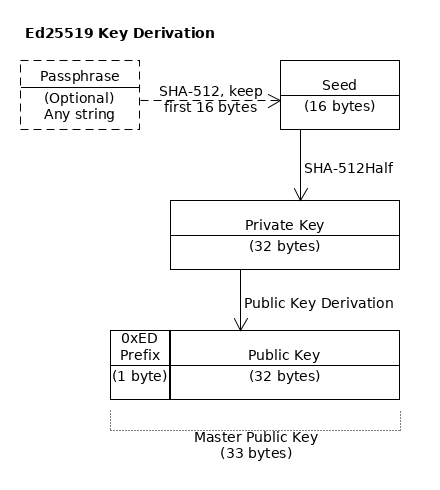 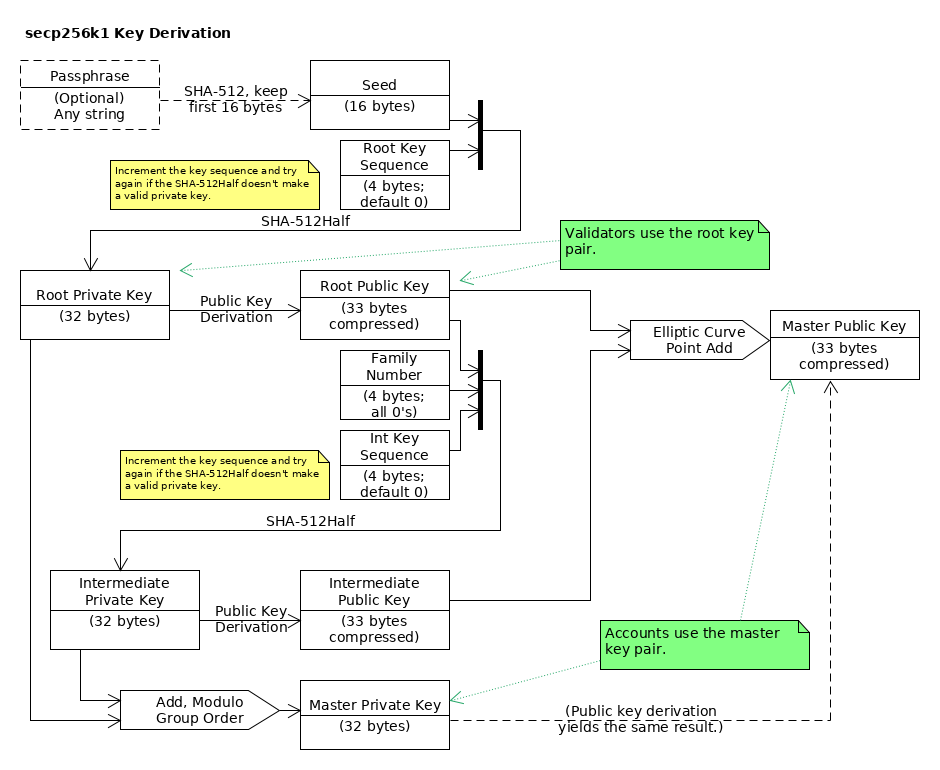 The steps to derive the XAG Ledger's secp256k1 account key pair from a seed value are as follows: