This page describes the XAG Ledger's canonical binary format for transactions and other data. This binary format is necessary to create and verify digital signatures of those transactions' contents, and is also used in other places including in the peer-to-peer communications between servers. The rippled APIs typically use JSON to communicate with client applications. However, JSON is unsuitable as a format for serializing transactions for being digitally signed, because JSON can represent the same data in many different but equivalent ways.

The process of serializing a transaction from JSON or any other representation into their canonical binary format can be summarized with these steps:

The result is a single binary blob that can be signed using well-known signature algorithms such as ECDSA (with the secp256k1 elliptic curve) and Ed25519. For purposes of the XAG Ledger, you must also hash the data with the appropriate prefix (0x53545800 if single-signing, or 0x534D5400 if multi-signing). After signing, you must re-serialize the transaction with the TxnSignature field included.

Note: The XAG Ledger uses the same serialization format to represent other types of data, such as ledger objects and processed transactions. However, only certain fields are appropriate for including in a transaction that gets signed. (For example, the TxnSignature field, containing the signature itself, should not be present in the binary blob that you sign.) Thus, some fields are designated as "Signing" fields, which are included in objects when those objects are signed, and "non-signing" fields, which are not.

The serialization processes described here are implemented in multiple places and programming languages:

These implementations are all provided with permissive open-source licenses, so you can import, use, or adapt the code for your needs in addition to using it alongside these documents for learning purposes.

The following JSON file defines the important constants you need for serializing XAG Ledger data to its binary format and deserializing it from binary:

The following table defines the top-level fields from the definitions file:

For purposes of serializing transactions for signing and submitting, the FIELDS, TYPES, and TRANSACTION_TYPES fields are necessary.

The field definition objects in the FIELDS array have the following fields:

When decoding, you can tell how many bytes the field ID is by which bits of the first byte are zeroes. This corresponds to the cases in the above table:

Caution: Even though the Field ID consists of the two elements that are used to sort fields, you should not sort by the serialized Field ID itself, because the byte structure of the Field ID changes the sort order.

Some types of variable-length fields are prefixed with a length indicator. Blob fields (containing arbitrary binary data) are one such type. For a list of which types are length-prefixed, see the Type List table.

Note: Some types of fields that vary in length are not length-prefixed. Those types have other ways of indicating the end of their contents.

The length prefix consists of one to three bytes indicating the length of the field immediately after the type prefix and before the contents.

When decoding, you can tell from the value of the first length byte whether there are 0, 1, or 2 additional length bytes:

Each field type has an arbitrary type code, with lower codes sorting first. These codes are defined in SField.h .

For example, UInt32 has type code 2 , so all UInt32 fields come before all Amount fields, which have type code 6 .

The definitions file lists the type codes for each type in the TYPES map.

Each field has a field code, which is used to sort fields that have the same type as one another, with lower codes sorting first. These fields are defined in SField.cpp .

For example, the Account field of a Payment transaction has sort code 1 , so it comes before the Destination field which has sort code 3 .

Field codes are reused for fields of different field types, but fields of the same type never have the same field code. When you combine the type code with the field code, you get the field's unique Field ID.

Transaction instructions may contain fields of any of the following types:

In addition to all of the above field types, the following types may appear in other contexts, such as ledger objects and transaction metadata:

Fields of this type contain the 160-bit identifier for an XAG Ledger account. In JSON, these fields are represented as base58 XAG Ledger "addresses", with additional checksum data so that typos are unlikely to result in valid addresses. (This encoding, sometimes called "Base58Check", prevents accidentally sending money to the wrong address.) The binary format for these fields does not contain any checksum data nor does it include the 0x00 "type prefix" used in address base58 encoding. (However, since the binary format is used mostly for signed transactions, a typo or other error in transcribing a signed transaction would invalidate the signature, preventing it from sending money.)

The "Amount" type is a special field type that represents an amount of currency, either XAG or an issued currency. This type consists of two sub-types:

You can tell which of the two sub-types it is based on the first bit: 0 for XAG ; 1 for issued currency.

The following diagram shows the serialization formats for both XAG amounts and issued currency amounts: 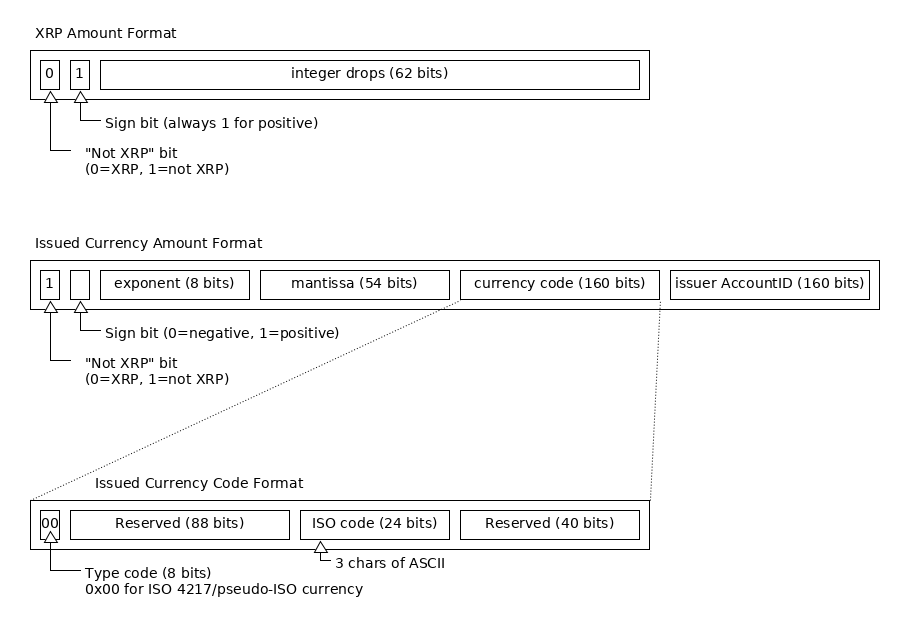 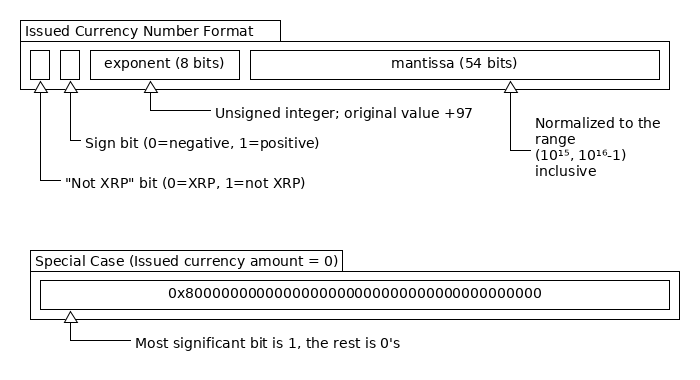 The numeric amount is serialized alongside the currency code and issuer to form a full issued currency amount.

At a protocol level, currency codes in the XAG Ledger are arbitrary 160-bit values, except the following values have special meaning:

The nonstandard format is any 160 bits of data as long as the first 8 bits are not 0x00.

Some transaction fields, such as SignerEntries (in SignerListSet transactions) and Memos, are arrays of objects (called the "STArray" type).

Arrays contain several object fields in their native binary format in a specific order. In JSON, each array member is a JSON "wrapper" object with a single field, which is the name of the member object field. The value of that field is the ("inner") object itself.

In the binary format, each member of the array has a Field ID prefix (based on the single key of the wrapper object) and contents (comprising the inner object, serialized as an object). To mark the end of an array, append an item with a "Field ID" of 0xf1 (the type code for array with field code of 1) and no contents.

The following example shows the serialization format for an array (the SignerEntries field):

The Blob type is a length-prefixed field with arbitrary data. Two common fields that use this type are SigningPubKey and TxnSignature, which contain (respectively) the public key and signature that authorize a transaction to be executed.

Blob fields have no further structure to their contents, so they consist of exactly the amount of bytes indicated in the variable-length encoding, after the Field ID and length prefixes.

The XAG Ledger has several "hash" types: Hash128, Hash160, and Hash256. These fields contain arbitrary binary data of the given number of bits, which may or may not represent the result of a hash operation.

All such fields are serialized as the specific number of bits, with no length indicator, in big-endian byte order.

Some fields, such as SignerEntry (in SignerListSet transactions), and Memo (in Memos arrays) are objects (called the "STObject" type). The serialization of objects is very similar to that of arrays, with one difference: object members must be placed in canonical order within the object field, where array fields have an explicit order already.

The following example shows the serialization format for an object (a single Memo object in the Memos array).

The Paths field of a cross-currency Payment transaction is a "PathSet", represented in JSON as an array of arrays. For more information on what paths are used for, see Paths.

A PathSet is serialized as 1 to 6 individual paths in sequence[Source] . Each complete path is followed by a byte that indicates what comes next:

Each path consists of 1 to 8 path steps in order[Source] . Each step starts with a type byte, followed by one or more fields describing the path step. The type indicates which fields are present in that path step through bitwise flags. (For example, the value 0x30 indicates changing both currency and issuer.) If more than one field is present, the fields are always placed in a specific order.

The following table describes the possible fields and the bitwise flags to set in the type byte to indicate them:

Some combinations are invalid; see Path Specifications for details.

The AccountIDs in the account and issuer fields are presented without a length prefix. When the currency is XAG , the currency code is represented as 160 bits of zeroes.

Each step is followed directly by the next step of the path. As described above, last step of a path is followed by either 0xff (if another path follows) or 0x00 (if this ends the last path).

The following example shows the serialization format for a PathSet:

The XAG Ledger has several unsigned integer types: UInt8, UInt16, UInt32, and UInt64. All of these are standard big-endian binary unsigned integers with the specified number of bits.

When representing these fields in JSON objects, most are represented as JSON numbers by default. One exception is UInt64, which is represented as a string because some JSON decoders may try to represent these integers as 64-bit "double precision" floating point numbers, which cannot represent all distinct UInt64 values with full precision.

Another special case is the TransactionType field. In JSON, this field is conventionally represented as a string with the name of the transaction type, but in binary, this field is a UInt16. The TRANSACTION_TYPES object in the definitions file maps these strings to specific numeric values.